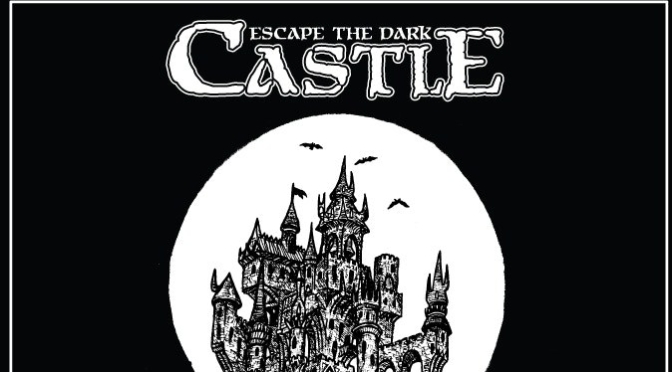 Themeborne, an independent group of game developers based in Nottingham, UK, kicked off their new endeavour with the amazing Escape the Dark Castle – frankly, one the coolest games you can learn to play, and teach your newbie mates.

An elegant cooperative card game you’ll want to play / smash in the face again and again.

I’ll get to telling you why shortly, but first, let’s meet the gang.

Thomas Pike, games writer and critic; Alex Crispin, designer, illustrator and mask wearer also a musician and composer (guess that’s where the cassette tape came from); and James Shelton, co-designer with experience in film making (he did the promotional trailer).

Escape the Dark Castle (EDC) was successfully funded on Kickstarter at the end of June 2017, gaining a cool 2119 backers and smashing their £11K target with nearly £90K pledged.

What made it so good?

EDC puts you in the shoes of one of the several medieval citizens imprisoned in the Dark Castle, the cook, the smith and so on. Each character has particular strengths in one of three attributes; Might, Cunning and Wisdom.

Each character has a single special dice which they roll when the time comes and the combined rolls of all the characters determines their success or failure of certain goals in their epic escape.

You find loot, special items, magical googaws and the iconic GOLDEN AXE (which can backfire a little) which was available to Kickstarter backers and will be made available again in the upgrade box.

The theme of the game is very much 1980’s fantasy – the artwork is black ink on white, reminiscent of the glorious Hero Quest days when artists couldn’t afford paints and printing technologies were not as they are now (it also explains the cassette tape bonus on the Kickstarter project, retro). The art, the concept tape and the amusing 80’s style trailer all add to that nostalgic feel – rekindling some long-forgotten childhood memories (which I embrace).

Here’s some tasty boasting from the Kickstarter which I can confirm, having the played the game extensively… the perfect selling points are:

EDC does all of these things, and I can’t wait to play it by candle light on a stormy night in the middle of winter and feel that sweet cosiness.

And what is even better, there’s already an expansion out, Cult of the Death Knight!

Escape the Dark Castle is priced at around £30, with the expansion a pleasant £15 available on the Theme Borne website or your local retailers.

They are currently working on their latest Kickstarter which is due to ship sometime this year.

There’re 2 more expansions – Scourge of the Undead Queen and Blight of the Plague Lord.